I can’t remember why I decided to follow @SamsungMobileUSA on Twitter. It must have been around the time when I was waiting for the first Galaxy S to arrive. Or, it could have been during my frustration of not being able to update my phone’s firmware (still haven’t) sometime during the end of 2010.

Whenever it happened remains a mystery. Since then, I’ve received shallow marketing-speak about products and whatnot. Good times.

The other day, I was having a fantastic morning and decided to be social on the web and comment and respond to as many social things as possible. I blame massive amounts of coffee. One of the social media odds and ends that I decided to partake in was to respond to Samsung’s question on Twitter:

"Who do you admire?"

Noticing the #SamsungAdmire part, I quickly did some surface-level research about their upcoming smart phone targeted at back-to-school teens. Always curious about content, it led me to want to know more.

Where is their content strategy taking their fans and followers? What happens to all of the responses?

Anticlimactically, there hasn’t been much action with the #SamsungAdmire trend what-so-ever. Ironically, everyone who chimes in seems to pay reverence to their older family members. 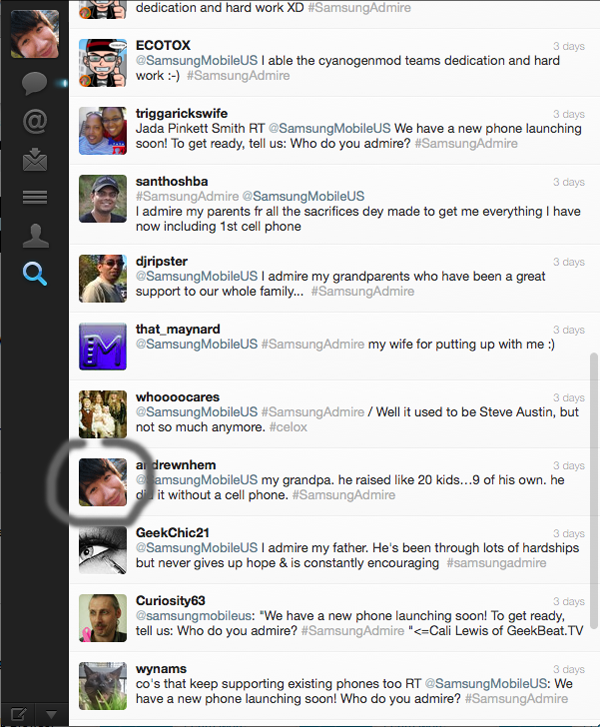 There’s my shout-out to my grandpa.

I went to the Samsung Mobile site and tried looking for some content for the Admire. Not much there. It’s basically a glorified “COMING SOON” page. Nothing interesting. Nothing to teach me why I should be any more excited about the phone than I already am (which is a very small, small amount).

It’s only been three days, but doesn’t the pace of these social campaign move a bit quicker? Or, does that only apply to well-planned social media executions?

I couldn’t help but think about how Hershey’s got owned pretty hard by Fair Trade activists during Hershey’s “National S’mores Day” event on Facebook. Protesters swiftly created and uploaded content depicting the severity of child slave labor in the world’s remote chocolate industries and their abhorrence of the practice. I won’t link to Facebook, so go check it out if you’re super-curious after reading.

While the campaign gained a little more attention than what Hershey’s marketing team intended, it had wheels. It caused a stir. It brought attention.

Samsung’s whole Admire thing is quite sluggish from the start. Considering that their audience for the smart phone are teens who can’t wait to get a new phone for school (seriously?) and who will probably destroy non-unlimited data plans, you’d think that they’d have a more lively content experience to get their devices flying off the shelves.

This, from the company that heralds the "time for a better tablet."

Their other device, the Galaxy Tab, has a lot of interesting content that keeps would-be slate and phone owners wondering on which side of the Android-Apple war to be. The Tab team has a bevy of exciting commercials and a pretty solid web presence to entice device enthusiasts all over the world.

Yes, there are hundreds of other phones that go unnoticed from Samsung. The Admire sticks out to me because it targets, then completely avoids a very young and influential market that could become future Samsungites.

What bothers me is how they (and other device manufacturers) let go of opportunities to own a very low-budget, tech-malleable market. Considering that the teenage crowd may be a low-profit sub-market, it is also the crowd that will grow into the next generation of smart phone-addicted professionals. Isn’t this a time to be gaining some nostalgia and brand cred with this crowd? It’s surprising to not see content dedicated to creating early adopters of Samsung products…or any non-Apple phone product for that matter.

Apple may be a brand powerhouse, but I’m sure there’s a big idea or concept out there to take hold of smart phone first-timers. Maybe Google-rola will have something to say about that soon.